The Trial and Crucifixion of Christ 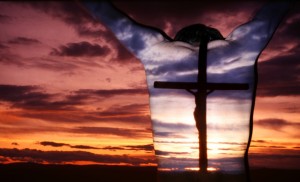 For three and a half years Jesus had taught that he had to go to the cross, take on the sins of the world and die for humanity. In the upper room He and His disciples ate the Passover meal then Jesus washed His disciples’ feet – including Judas, knowing that he would betray Him. Jesus knew what lay ahead of him — His disciples could not possibly have imagined. Then he prayed “Father, the time has come, I have finished the work you gave me. Now these you gave me, make them one as we are one.” (John 17)Then he left to go to the olive grove, better known as the Garden of Gethsemane.

The Garden of Gethsemane
This is where it all began with the first Adam, only this time this was not a temptation from Satan, but a mystery from God. The time was drawing closer. The next 12-15 hours were the most traumatic Jesus had to face. Who could possibly measure the anguish that He experienced as He submitted His will to that of the Father—as He anticipated His separation from the Father when He would bear the sins of the world.

“…He knelt down and prayed, “Father if it is Your will, remove this cup From Me, nevertheless, not my will but yours be done.” Luke 22:42

This was the beginning of a long and sleepless night. Luke 22:44 says “And being in agony he prayed more earnestly: and his sweat was as it were great drops of blood falling down to the ground,”

This bloody sweat is known medically as hematidrosis, and in the gospel narratives is mentioned only by the physician Luke. This phenomenon has been documented on other rare occasions among persons undergoing extreme psychological or physiological stress. It is caused by tiny capillaries under the skin surface distending and ultimately going into arterial spasm with necroses, and rupturing into the sweat glands.

This results in a bloody secretion—blood mixed with sweat—exuding through the pores of the skin. The loss of this bloody, sweaty mixture would create profound dehydration and early stages of shock.

Christ’s Arrest
After He had prayed, He awoke his disciples and urged them to pray so that they would not fall into temptation. It was then that he saw the multitude approaching – led by Judas, his disciple – soldiers, high priests and some members of the Sanhedrin. They had come to arrest him, and this was the start of the humiliation and torture He would have to endure as they put Him through six trials.

“Then Judas, having received a detachment of troops, and officers from the chief priests and Pharisees, came there with lanterns, torches, and weapons. 4 Jesus therefore, knowing all things that would come upon Him, went forward and said to them, “Whom are you seeking?” John 18:3-4

If you read on when Jesus said “Whom are you seeking?”  They answered Him, “Jesus of Nazareth.”
“Now when He said to them, “I am He,” “they drew back and fell to the ground”.  (John 18:4-6) Jesus, the Bible says, could have called for more than 12 legions of angels (Matthew 26:53) if He wanted to, but that would have meant defeat and He knew no defeat..

Then the high priest tore his clothes
“65 Then the high priest tore his clothes, saying, “He has spoken blasphemy! What further need do we have of witnesses? Look, now you have heard His blasphemy! 66 What do you think?” They answered and said, “He is deserving of death.” 67 Then they spat in His face and beat Him; and others struck Him with the palms of their hands, 68 saying, “Prophesy to us, Christ! Who is the one who struck You?”
Matthew 26:65-67

Jesus was the only person put to death for who He was and not for what He had done.
I believe these scriptures could have been flowing through Jesus’ mind as these evil men were plotting to take His life.

“13 For I hear the slander of many; Fear is on every side; While they take counsel together against me,
They scheme to take away my life.14 But as for me, I trust in You, O LORD; I say, “You are my God.”
15 My times are in Your hand; Deliver me from the hand of my enemies, And from those who persecute me.” Psalm 31:13-15

“Princes also sit and speak against me, But Your servant meditates on Your statutes.” Psalm 119:23

“And the priests and the prophets spoke to the princes and all the people, saying, ‘This man deserves
to die! For he has prophesied against this city, as you have heard with your ears.” Jeremiah 26:11

The Romans Had No Law
The same Jesus, who had performed miracles, healed the sick and loved the unlovable, now had to endure the indignity of their mockery, and the cruel scourging ordered by Pilate. Popular belief is that Jesus took 39 stripes. However, it was the Romans who beat Him and there was a difference between Jewish and Roman law in this regard. Under Jewish law only 40 lashes were allowed, so beatings were stopped at 39 lashes to be sure that a miscount did not take place.

The Romans knew no such limitations. They could beat a man almost to death – this happened in the case of Jesus. It was part of the humiliation that the one being crucified was going through.

And With His Stripes
But these stripes were not in vain as Isaiah 53:5 tells us that He was wounded for our transgressions, he was bruised for our iniquities: the chastisement of our peace was upon him; and with his stripes we are healed. Scripture was being fulfilled.

His face and His whole appearance were marred more than any man’s
So what happened in the case of Jesus?

“Yet many shall be amazed when they see him-yes, even far-off foreign nations and their kings; they shall stand dumbfounded, speechless in his presence. For they shall see and understand what they had not been told before. They shall see my Servant beaten and bloodied, so disfigured one would scarcely know it was a person standing there. So shall he cleanse many nations.” Isaiah 52:14-15 (TLB)

Death by Crucifixion
Death by crucifixion developed into one of the world’s most disgraceful and cruel methods of torture. Cicero called it “the most cruel and hideous of tortures.” Will Durant wrote “Even the Romans… pitied the victims.” (Josh Mc Dowell “The Resurrection Factor”)

Jesus had been condemned to death by crucifixion. With the crown of thorns still pressed deeply into His scalp, His body broken and bleeding, He was made to carry his cross to Golgotha — the hill of the skull.

Psalm 22, which  was written hundreds of years before crucifixion was ever practiced, best describes what took place at Golgotha: verse 7, “All they that see me laugh me to scorn: they shoot out the lip, they shake the head…I am poured out like water, and all my bones are out of joint; my heart is like wax; it is melted in the midst of my bowels.” (Verse 14)

“My strength is dried up like a potshard; and my tongue cleaveth to my jaws; and thou host brought me into the dust of death. For dogs have compassed me; the assembly of the wicked have enclosed me: they pierced my hands and my feet. I may tell (count) all my bones: they look and stare upon me. They part my garments among them, and cast lots upon my vesture.” (Psalm 22:15-18)

At the ninth hour, darkness fell upon the earth and Jesus gave up His spirit. At this point He was completely separated from God by the sins of the world. It was this great act of love that bridged the chasm — the separation from God caused by sin. Through Christ, and His atoning work on the cross, we can now be reconciled to God.

In keeping with Jewish tradition, His body was taken off the cross and placed in a borrowed tomb by Joseph of Arimathea and Nicodemus.

A Solid Rock Tomb
It was a solid rock tomb, and the stone that sealed the tomb weighed about 1 to 2 tons. A Roman security guard was posted to guard the tomb.

Death Could Not Hold Him
But death could not hold him — the stone was rolled away (in spite of the very efficient Roman guard) and only the linen cloths and neatly folded handkerchief that had covered His head, were to be found in the tomb!

The Resurrection of Christ
On the third day after He had been crucified, He arose again. He had conquered death and the tomb was empty. To this very day the empty tomb is a dramatic testimony to the power of our risen Lord and Savior, Jesus Christ. Because Christ was raised from the dead, He lives. He has that infinite capacity to enter a man or woman’s life, forgive them and change them from the inside out.

Without the resurrection, the apostle Paul declared, Christian preaching and belief are meaningless. So significant is the resurrection of Jesus that without it there would be no church or Christianity, and we would still be lost in our sins without hope.

The death, burial, and resurrection of Jesus Christ are, without a doubt, the most important events in history. This is the Christian’s hope. Jesus completely paid for our sins when He died in our place on the cross. He defeated death and proved in His resurrection, beyond any uncertainty, that all He said was true. This is what we celebrate, “the Resurrection,” our risen Savior is alive and well and now sits on the right hand of the throne of God where He ever lives to make intercession for us.

What can we learn through the crucifixion of Christ?  To the natural man it is a gruesome act of cruelty. To God, it was an act of pure love and grace, reaching out to a lost world dying in its sin.

Our responsibility now is to take advantage of every opportunity that is presented to us, whether it be personal contact with people; through preaching or teaching the word of God; tragedy such as September 11, 2002; or through a play or a movie of the passion of Christ. The church of the Lord Jesus Christ has to be ahead of the world and often we lag behind.

We must never forget that Satan is the master of deception and he will do anything to divert our attention from our first love, Jesus, which in turn will cause our compassion for the lost to wane. The key to staying on the cutting edge of being an effective witness is to keep our focus, our vision, our goal, our attention on building our relationship with the Lord Jesus Christ, our first love.

Your labor is not in vain in the Lord
We have been called to be servants and witnesses of the Most High God. His Son paid the price to redeem us from the slave market of sin. The rewards are astounding when you study them in the word of God. Here are a few promises from the word of God for being a witness.

Now, my prayer is that you would reach out to those who are in need so that you can receive your reward not only on this earth, but in the world to come. Amen

The prime reason for Jesus coming to the earth was three-fold:

Now it is up to each and every believer to do the work of an evangelist, to go out and preach the gospel to every person, for all believers to teach all nations the good news and for all believers to become servants and witnesses for the Most High God and the King of glory. Hallelujah!