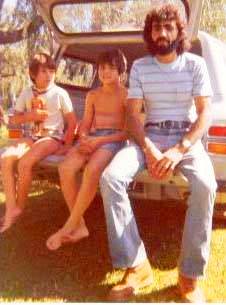 Peter with his sons, Hilton and Grant, before he was saved

As a young boy, Peter always said he wanted to be a priest. He is the eighth of ten children, the youngest of four boys. Peter grew up in a God-fearing home. and when he was a young man of nineteen, he married his lovely wife, Dyllis.

Through a series of unfortunate decisions, Peter’s father bought a general store in the inner city of Johannesburg, and throughout his childhood, Peter witnessed some horrific things in their neighborhood. Peter began using alcohol and marijuana in his early teen years, and it only grew worse from there. By his early twenties, due to the negative environment, Peter had become involved in a lifestyle of heavy drug and alcohol abuse and extreme violence. Soon, Peter’s alcoholism and drug addiction resulted in a demonic stranglehold on his life.

Living a life of reckless sin, the years that followed brought sheer mayhem. Narrowly escaping death several times, Peter was involved in three near-fatal car accidents, he was stabbed on two occasions, gunfire narrowly missing him on other occasions and he was arrested several times. The drug culture had given him an inferiority complex resulting in a life full of fear and rage so Peter stockpiled seventeen firearms, believing the .45 Colt pistol he carried everywhere would protect him.

His Conversion In His Own Words
“On Tuesday, May 27, 1980 at 12 noon in my kitchen, all on my own, Jesus delivered me of fourteen years of drugs, and twenty years of alcohol – even though I had refused an invitation to accept Him in a church service the night before.

He came with such a force of love and delivering power that my kitchen was lit up by the glory of His presence. I hit the ground and shook and trembled for hours afterwards. I thought I was going to die at first but there was such a peace that surpassed my understanding. That’s when he spoke to me and said, “Rejoice for I have delivered you.” I remembered the night before how the people were raising their hands and worshiping the Lord so I raised my hands in worship and surrender to the only true God of all creation. Three times the Lord said to me, “Rejoice for I have delivered you!” Hallelujah! Jesus Christ of Nazareth delivered me and set me free. Praise His wonderful name. When the Son sets you free you are indeed free (John 8:36.)

I immediately went into my room, found the shoe box filled with marijuana and drugs and threw everything into the trash can. I tried having a drink two days later but it tasted so vile I threw the wine down the drain.

All glory to Jesus, I have been totally free ever since. Praise God!

Twelve Days Later
On the 8th of June, twelve days late, I went back to the same fellowship where I had refused to accept Christ. They were holding their first faith convention and an evangelist by the name of Sandy Brown from the USA was preaching. She gave a call for those who wanted to be saved, filled with the Holy Spirit or needed healing. I had fasted the whole day as I wanted to be filled with the Holy Spirit and healed of arthritis, but I was not prepared for what followed when Sandy Brown laid her hands on me. I went down like I had been hit by a heavyweight boxing champion and when I tried to get up and go back to my seat I kept hitting the ground.

She began prophesying over me that I would travel to the nations and that many would be set free by my ministry and testimony. Since then, my wife and I have preached in every major city of South Africa and have traveled to many parts of Africa, Europe and have preached in twenty seven states in America. I give God all of the glory for what He has done for me and my wonderful family.

Study Is Never Lost Time
I hadn’t worked for several months and in between looking for a job, I studied the Word, listened to teachings on audio tapes and prayed in the spirit. My family and I joined a wonderful Word-based church and served within the church wherever we could. The Lord led me to an excellent job where I earned a very good salary for four years and eight months before entering the full time ministry on January 26th, 1986. I have been serving God in full time ministry ever since.

Serving the Body
Within three months I became an usher in the church and served in this capacity for three years. I was then invited to join the Healing Ministry and served in this ministry for eleven years. During this eleven year period I also assisted the pastor’s wife with intercessory prayer. We saw South Africa go through many transitions and believe these were the most crucial years in our history. The people of God cried out to the Lord in prayer day and night, God spared the country from a civil war.

“If My people who are called by My name will humble themselves, and pray and seek My face, and turn from their wicked ways, then I will hear from heaven, and will forgive their sin and heal their land. 15 Now My eyes will be open and My ears attentive to prayer made in this place.” (2 Chronicles 7:14-15)

Peter and Street Ministry
Within only a few months of being saved my wife and I joined this very fruitful work of God. Men and women were out in the open air in the center of the city of Johannesburg playing musical instruments. They seemed so bold and courageous I was almost intimidated by all of it but something happened when one of the men got up to preach. The spirit of the Lord rose up in me until I felt I was about to burst with excitement and there and then I received revelation and understanding that this is the way Jesus taught and led His disciples in the market place. Instantly my life was changed. There was no more intimidation or ever being ashamed of this gospel or of the mighty name of Jesus. My wife and I became so loyal to the work done in this glorious outreach that they appointed us in charge of this ministry. God did such a mighty work in me – the first time I was asked to preach seventy people responded to the call to invite Jesus into their lives as Lord and savior. During this time 100,000 people were born-again in the streets alone, many miracles, signs and wonders were witnessed as the Gospel was proclaimed, and through this ministry many young men and women were raised up to be leaders and evangelists in the Body of Christ. Many to this day serve Him with zeal, boldness and passion and several are traveling the world setting the captives free by the wonderful name of Jesus. Hallelujah!

Carrying the Cross
Cross-carrying was a large part of this ministry. Teams consisting of both men and women carried crosses into areas where the poor and destitute would be ministered to, fed and given literature in their own languages as well as follow up material. They were also directed to a church near their homes or alternatively the church sponsored buses that collected passengers at different points around Johannesburg and the greater part of the city and took them to the local church in Randburg.

Teach My People
In 1986 in Johannesburg South Africa, my team and I were getting ready to go out into the streets. Suddenly the Lord spoke to me and said, “Teach my people to be strong, courageous and not dismayed for I am with them always.” Since then I have been traveling around the world, teaching and preaching on this subject.