We Are More Than Conquerors 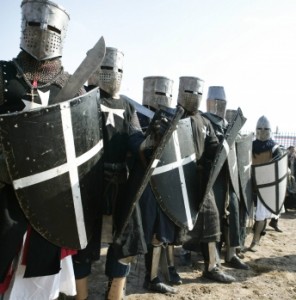 “Yet in all these things we are more than conquerors through Him who loved us. 38 For I am persuaded that neither death nor life, nor angels nor principalities nor powers, nor things present nor things to come, 39 nor height nor depth, nor any other created thing, shall be able to separate us from the love of God which is in Christ Jesus our Lord.” Romans 8:37-39

Does this sound familiar? “If I am more than a conqueror and Jesus defeated the devil so that I can walk victorious in this life, then why do I struggle to get to a place where I can be victorious?   I know the Bible is absolute truth and that God cannot lie, so why then do I strive to overcome the smallest obstacles? I read my Bible, I pray, I go to church, I tithe, but never seem to gain the victory over my circumstances“. This is a frequently asked question in Christian circles. It’s a valid question, and I have two profound answers:

The entire Bible has been given to us – written by man but inspired by God – to help every person on the earth. Therefore we have to exercise and put into practice, all of the Word of God relating to every circumstance so that we may achieve the greatest results.

“Every Scripture is God-breathed (given by His inspiration) and profitable for instruction, for reproof and conviction of sin, for correction of error and discipline in obedience, [and] for training in righteousness (in holy living, in conformity to God’s will in thought, purpose, and action).”   2 Timothy 3:16 (AMP)

“It is God’s way of making us well prepared at every point, fully equipped to do good to everyone.”

Conqueror
The word conqueror means: someone who has enjoyed great success in war and has defeated an enemy or enemies. It also means to vanquish beyond, subjugate, annihilate, overcome, overpower, literally to gain a decisive victory.

Christ’s Death – Our Victory
We, as believers, are the ones who are more than conquerors. Jesus Christ conquered hell, death and the grave for us and He did this while we were still sinners, now we have become heirs of God and joint-heirs with Christ. What an awesome inheritance we have through His victory.

As we walk in the Spirit and in this victory, we can say that Christ constantly infuses strength in us. He subdued our enemies; He triumphed over Satan leaving principalities, powers and the rulers of the darkness of this age, the spiritual hosts of wickedness in the heavenly places, powerless and defeated.

We can now say, as the Apostle Paul said: “I have strength for all things in Christ Who empowers me [I am ready for anything and equal to anything through Him Who infuses inner strength into me; I am self-sufficient in Christ’s sufficiency]” (Philippians 4:13 AMP)

Now we can constantly enforce the defeat of our arch enemy, by keeping our foot on his defeated neck and sing the song that Moses and the children of Israel sang to the Lord.

“I will sing to the LORD, For He has triumphed gloriously! The horse and its rider He has thrown into the sea! 2 The LORD is my strength and song, And He has become my salvation ;He is my God, and I will praise Him; My father’s God, and I will exalt Him. 3 The LORD is a man of war; The LORD is His name.” Exodus 15:1-3

According to the New Testament we have so much more based on a better covenant, with better promises, based on grace versus the law. In the Old Testament they sacrificed animals to be forgiven of their sins, now we have been forgiven through the shed blood of Christ, the Lamb of God who takes away the sin of the world. Oh, what a mighty God we serve!

Caleb was bold and courageous

We read about a man in the Old Testament named Caleb, who followed God wholeheartedly. He was one of the 12 men who went to spy out the Promised Land. He and Joshua brought back a good report, whereas the other 10 spies brought back a bad report.

“But Caleb tried to encourage the people as they stood before Moses. “Let’s go at once to take the land,” he said. “We can certainly conquer it!” 31 But the other men who had explored the land with him answered, “We can’t go up against them! They are stronger than we are!” Numbers 13:30-31 (NLT)

He Had a Different Spirit
“Surely all the men who have seen My glory and My signs which I performed in Egypt and in the wilderness, yet have put Me to the test these ten times and have not listened to My voice, 23 shall by no means see the land which I swore to their fathers, nor shall any of those who spurned Me see it. 24 “But My servant Caleb, because he has had a different spirit and has followed Me fully, I will bring into the land which he entered, and his descendants shall take possession of it. Numbers 14:22-24 (NASU)

The words different spirit mean: one that does not procrastinate, but one that will accomplish, confirm, and consecrate, what the Lord God of heaven and earth has spoken and commanded. Hallelujah!

Because Caleb was so bold and confident, one would think that thousands of men would have agreed to go into the Promised Land as well. I for one would think that two million Israelites would be tired of wandering in the wilderness and would want to finally go into a land that flowed with milk and honey.

We can only imagine how low their self-esteem was, coming out of 400 years of bondage, the fear of the past and what man had done to them and now the enemy that faced them in the future. They definitely did not stop for one minute to think about what their God had done for them by releasing them from the slave market of captivity. They started murmuring from the day that Pharaoh let them go.

Caleb Victorious at 85
“Now behold, the LORD has let me live, just as He spoke, these forty-five years, from the time that the LORD spoke this word to Moses, when Israel walked in the wilderness; and now behold, I am eighty-five years old today. 11 ” I am still as strong today as I was in the day Moses sent me; as my strength was then, so my strength is now, for war and for going out and coming in. 12 “Now then, give me this hill country about which the LORD spoke on that day, for you heard on that day that Anakim were there, with great fortified cities; perhaps the LORD will be with me, and I will drive them out as the LORD has spoken.” 13 So Joshua blessed him and gave Hebron to Caleb the son of Jephunneh for an inheritance Joshua 14:10-13 (NASU)

He Wholeheartedly Pursued God
This tells me everything about Caleb was pleasing to his God. At 85 years old he was willing to go into the hill country, fight the fiercest giants in the land, conquer them and then possess the land. This is where Caleb got his name from – which means, bold courageous and impetuous. He and Joshua including the youth, twenty years of age and younger were the only people who were allowed to enter the Promised Land. Caleb conquered, because he followed the Lord God wholeheartedly (Joshua 14:8-9,14)

God has gone to great lengths to get His people to understand how much He loves them. The greatest way He expressed this divine love was through the cross. His own Son hung between heaven and earth, reconciling God and man, dying this cruel death for all of humanity. The Bible says “That through death He might destroy him that had the power of death, that is, the devil.” (Hebrews 2:14) Jesus Christ literally had to go through death to take the spirit of death and destroy him. Glory to His mighty name!

“And you, who once were alienated and enemies in your mind by wicked works, yet now He has reconciled 22 in the body of His flesh through death , to present you holy, and blameless, and above reproach in His sight.”  Colossians 1:21-22

We were once enemies of God, we rebelled and ran from Him yet He loved us while we were still sinners.

From the time God delivered His people out the bondage of Egypt, they murmured, they complained, they rebelled against Him and Moses. They made images of false gods out of metal, wood and stone, but nothing they could do could stop the flow of His love towards them. In the book of Deuteronomy 32:9-10 it says Israel was God’s own personal possession! God protected them in the howling wilderness as though they were the apple of His eye.

“Oh, the depth of the riches both of the wisdom and knowledge of God! How unsearchable are His judgments and His ways past finding out!” Romans 11:33

At all cost we ought to obey our God. He has given us all things that pertain to life and godliness. He has given us His Son, His Spirit, and the angels to protect us. He has given us the earth with all of its goodness, the rain and the snow, the food and the fruit to eat, and all of this came absolutely free.

Now it is time to give back to our God, with our love, our praise, our worship and to love one another as Christ has loved us. Hallelujah!

“But thanks be to God, Who gives us the victory [making us conquerors] through our Lord Jesus Christ.

58 Therefore, my beloved brethren, be firm (steadfast), immovable, always abounding in the work of the Lord [always being superior, excelling, doing more than enough in the service of the Lord], knowing and being continually aware that your labor in the Lord is not futile [it is never wasted or to no purpose].”

When we are willing and obedient to do all of the Word of the Lord and let nothing stand in our way, then we will become valiant, overcomers in this life and more than conquerors through Christ Jesus our Lord.